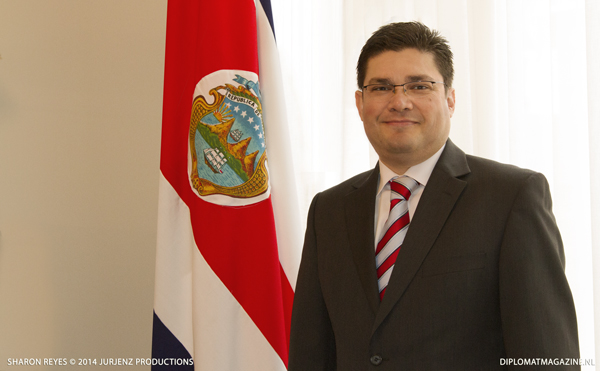 The newly appointed Ambassador of Costa Rica to the Kingdom of the Netherlands, H.E. Sergio Ugalde, explained the importance his country gives to the abolition of the Armed Forces.

“On 1 December 2014, Costa Rica celebrated the 66th anniversary of the abolition of the Armed Forces. Since 1948, Costa Rica has entrusted its national security to international law and diplomacy, and its foreign policy has focused on sharing that experience and pursuing a world committed to the rule of law and the resolution of conflicts through peaceful means.

At its core, our policy strives to convince all nations that peace and disarmament are a centerpiece of the realization of all human rights, and that along with the principles of freedom and democracy, the force of reason must prevail as a safeguard for future generations. The abolition of the military is one of those exceptional steps that led Costa Rica to become a fairer more educated society, able to meet the most pressing needs of its population, focusing on human development rather than strengthening its military capabilities.

Costa Ricans have reaped the benefits of a decision which marked its development as a nation. The resources that would otherwise have gone to the maintenance and purchase of military weapons are directed to causes that seek greater prosperity for the people, particularly education, health services and the protection of the environment.

That fundamental decision made on December 1, 1948, and enshrined in the 1949 Constitution, currently in force, has forged generations of Costa Ricans who have never seen a war tank or a war plane on their territory. Costa Ricans do not aspire to carry a rifle and truly hope never dying in a battle field as a result of armed conflict. Yet, to achieve this high objective, it is fundamental that just not the Costa Ricans, but all peoples of the world, are given the conditions to renounce the use of force, effectively rendering military apparatuses ineffective. Through the unilateral renunciation of the use of force as a means of settling disputes, Costa Rica has privileged international law to preserve its national interests, its sovereignty and its democratic institutions. The country is acutely aware that much still needs to be done in the strengthening of International Law, but it notes with optimism that much has been achieved, thanks to respected legal institutions such as the International Court of Justice, the International Criminal Court and the Permanent Court of Arbitration.

Costa Rica continues to share with the international community its experience as a disarmed democracy, and it hopes that this experience will contribute to universal peace and security, principles that guide our foreign policy and it remains convinced that this experience might one day to be enjoyed by all nations and peoples.”