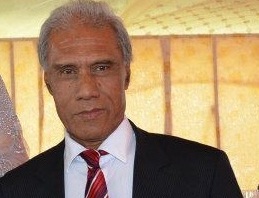 Civil rights activist and leader of the Democratic Party of the Friendly islands ‘Akilisi Pohiva was voted in as Tonga’s first non-noble Prime Minister on 29 December 2014.

Tonga is a constitutional monarchy, albeit the King gave up many constitutional powers in 2010 to pave the way for a parliamentary democracy. The country’s monarchs had previously appointed the prime minister and the cabinet. The 2010 constitutional reforms increased the number of elected commoners, or “people’s representatives” to 17, left the number of nobles at 9, and gave the 26-member Parliament the right to select the head of government. The King assumed a largely ceremonial role, but remains much revered by Tongans.

Back in 2010, the newly elected MPs could not agree on ‘Akilisi Pohiva as their candidate for prime minister. Instead, the noble MPs (selected by 33 holders of hereditary titles) clubbed together with the more conservative elected politicians from the northern islands of Tonga to select Lord Siale’ataonga Tu’ivakano as Prime Minister and Minister of foreign Affairs.

In the latest vote in December 2014, however, the “people’s representatives” garnered their votes, and elected Mr Pohiva with 15 ballots against 11 from the opposition.

Thus far the new cabinet includes only one noble, Lord Ma’afu, as Minister for Lands and His Majesty’s Armed Forces.

The new Prime Minister ‘Akilisi Pohiva has distinguished himself for being a fervent defender of democracy to the detriment of reyal power, and the privileges of the nobles. Indeed he was imprisoned in 1996 for “contempt of parliament”.