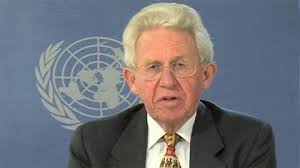 On Wednesday the 28th of January the Conference “Peacebuilding in Progress” was held. It was the fourth conference in a series organized by the University for Peace of the Peace Palace. The specific theme of the day was “International water disputes – The roles of international courts and arbitral tribunals in resolving them”. There was a presentation by Sir Kenneth Keith from New Zealand, appointed Judge to the International Court of Justice, with an additional presenation by the Senior Legal Counsel, Judith Levine, from the Permanent Court of Arbitration.

The conference was opened by Jeroen Vervliet, Director of the Peace Palace Library. The presentation of Judge Sir Kenneth Keith was informative and  focused on water disputes. He opened the conference with a walk down memory lane that showed his impressive career and extensive experience of being a judge. He was very realistic when mentioning frankly that the topic is quite limited. Also, what arbitrators and judges can do is also limited: they can’t do everything. Some things go far beyond their reach.

International water disputes are particular, they have relations with boundary disputes. For instance, rivers run through more countries than one and therefore there are more parties which can ignite a dispute.

Without a doubt, the question of environment arises. There is a clear interdependence between water, energy and food and therefore this is quite a complicated manner. The Judge provided a few examples of international water disputes to illustrate the variety of the topic. However, according to the Judge the law is still important and arbitrators and judges can help, even though they can’t do everything.

Judith Levine, Senior Legal Counsel, gave a presentation that was  focused on the general workings of the Permanent Court of Arbitration. Later she focused on specific case examples and the role of treaties. For instance, how does one regard and consider a treaty between Sudan and Egypt from years ago, when the political structure of Sudan is now different?

After the above presentations, there was time for questions and the conference was concluded by Marius Enthoven, Chairman of the University for Peace the Hague. Afterwards, there were drinks. This was the opportunity to mingle with the other participants who were diplomats, policy advisors from Dutch ministries, lawmakers, students and journalists.