Liechtenstein Speech from the Throne 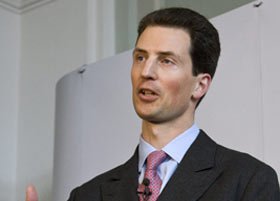 Deputising for His Serene Highness The Sovereign Prince of Liechtenstein, the principality’s heir to the throne, HSH Hereditary Prince Alois delivered the annual Speech from the Throne on Thursday, 22 January 2015, in the edifice of Parliament (Landtag).

Whereas Liechtenstein’s Sovereign Prince (Fürst) is Hans Adam II, the princely prerogatives are exercised on a daily basis by his eldest son and heir Hereditary Prince Alois since 2004 by Sovereign Princely decision. The latter’s wife, HRH The Hereditary Princess Sophie (née Duchess in Bavaria) belongs by birth to Bavaria’s erstwhile Royal Dynasty of Wittelsbach.

The Principality of Liechtenstein is Europe’s only remaining state from the Holy Roman Empire of the German Nation. The country came into being on 23 January 1719 after Emperor Karl VI allowed for the union of the lordships of Vaduz and Schellenberg into one single entity, the principality name after the dynasty of his “true servant” Prince Anton Florian von und zu Liechtenstein.

Liechtenstein has a limited diplomatic network of its own, limiting embassies to Berlin, Bern, Brussels, Geneva, New York, Strasbourg and Washington D.C. and Vienna. Everywhere else Liechtenstein’s interests are covered through the Helvetic missions, if Switzerland is not represented in a country, then Austrian missions normally step in for Liechtensteiners in need. Hence the Swiss Embassy in The Hague is empowered to deal with matters related to the principality in The Netherlands although the princely embassy in Brussels may also step in for bilateral affairs.

Tiny Liechtenstein is moreover Europe’s only state with German as exclusive official language.

The Speech from the Throne in full German version: