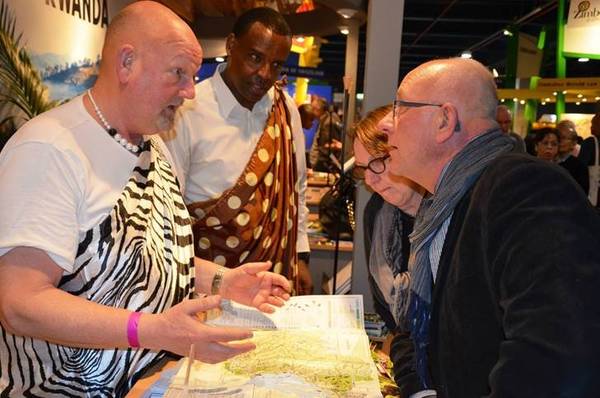 With Rwandan tourist properties registering increased global recognition, the Rwanda Development Board has moved to attract Dutch holiday makers and travellers by showcasing at the premier and high profile Vakantiebeurs; the largest tourism exhibition in the Benelux that took place in Utrecht at the Jaarbeurs Exhibition Centre.

Rwanda’s breath-taking tourist attraction sites were the highlight of the event. This included Nyungwe Forest Lodge that was recently recognized a top ten safari destination for 2015 by CNN Travel.

Focus was on the Canopy Walk in Nyungwe National Park and the Nyungwe Forest Eco-Lodge that attract visitors to its luxurious location at the Gisakura tea estates.

Rwanda’s Ambassador to the Netherlands, H.E. Jean Pierre Karabaranga said that participating in the Dutch tourism show was part of efforts to draw repeat and new travellers to the Land of a Thousand Hills. “We are positioning Rwanda as a destination that is offers more than the famous Gorillas,” he added noting that in the six years that Rwanda had been participating in the annual show, the number of Dutch tourists to Rwanda increased six fold. Rwanda, he added, is very accessible to Dutch tourists with the national airline is KLM serving Kigali five times a week.

Rwanda was among the 160 countries that participated at the Vakantiebeurs which also attracted over 1600 exhibitors. Access Rwanda Safaris and Amahoro Tours from Rwanda represented the country during the five-day event.