Ever since the eighties and being a PEN member I published my bilingual books of poetry  on social issues related to politics and peace. The Dutch minister of Culture presented my  ‘MIR’ – Russian for ‘peace’ – during Days of Dutch Culture  in 2003 to her Russian colleague  as the first book of poetry of a living Dutch poet translated in Russian language. All so long ago, those were the days….. As a kind of  peace poet I always felt inspired by human rights to denounce great and small themes. Before  Oprah’s book club  I already gave lectures on Nobel laureates in  reading circles, discussing their human rights.

Recognizing the strong link between literature and politics, since many peace activists have used poetry as an effective means to communicate their ideas to a world wide audience,  the Peace Palace library in The Hague invited me to write poems for her international website too,  but my first poem as a  her peace poet during the Centenary (2012-2013) was published  on X-mas day  on the international website of the prestigious palace,  and  four more poems followed as a gift.

Celebrating the Centenary the Dutch town of international peace  The Hague donated an enormous  bell for the carillon.  Her gift inspired me to write another poem ‘Bertha’s bell in GMT’, about the first female Nobel Peace laureate:  Why she? Well, to me Bertha was a ‘small’ role model  being a female author on human rights a century ago!    Author and peace activist Bertha von Suttner received the  Nobel Peace Prize in 1905 for the book   Lay Down Your Arms!

The book was published in 1889 in German  and became very quickly successful,  both because of its look at war and peace and because it addressed the issue of women in society. Three years later, it was published in English and has been translated into a total of sixteen languages. Until the publication of  All Quiet on the Western Front in 1929, Die Waffen nieder! (Lay Down your Arms!) was the most important German  literary work concerning war. Von Suttner chose to write a novel instead of a nonfiction book because she believed that the novel form would reach a wider audience.

In all poetic freedom I framed and labelled the donated bell – ‘Bertha’ – in a greasy wink  to  her book Die Waffen nieder ‘.  For Dicke Bertha  became the nick name of a German  howitser in the First World War.  The German factory  Krupp from Essen  demonstrated   Kurze Marine Kanone L/12  for the first time in 1893. The story goes that the howitser cannon is named after  Bertha Krupp, owner of the company Krupp AG,  but another explanation is the reference to  the obese Austrian pacifiste Bertha von Suttner. Anyway, my bold metaphore  in the  frame  of  ‘Bertha’s bell in GMT’ became my spiritual gift for the Peace Palace.  In a synesthesia  the reader  hopefully will hear and experience Bertha’s bell  in a declaration of  time in GMT  both on the ground and sea,  as a  token of peace in the future. 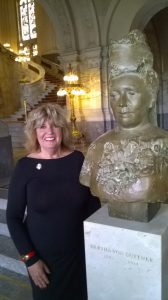 The library of the Peace Palace  had already extended her collection of poetry with several books of my poetry. Moreover we discussed  my lectures and archives on Nobel laureates,  preparing my new book ‘Rapiarium’ with 100 quotes on Nobellaureates.  I  suggested to programme a special website on Nobel laureates too. From 2013 the library which world wide is known on her prestigious collection in the field of international rights and peace, gave attention to the first female Nobel Peace laureate in a master class and lecture , while publishing ‘Bertha’s bell on GMT’ on their website and newsletter to  3500 readers in 2016.

The interview The Power of Poetry contemplated the special link between poetry, international peace and international justice. http://www.peacepalacelibrary.nl/2012/10/the-power-of-poetry . The library has a separate hit on poetry, containing in total 57 books and articles, the poems of  Hugo Grotius  and my poem on   Bertha von Suttner too.

Bertha’s bell in GMT:  Nobel  laureate for Peace  Bertha von Suttner. Austrian peace activist (1843-1914). The Hague’s Centenary gift: an enormous bell for the carillon of the Peace Palace  in 2012. The life expectancy for new-born girls in 2013 is 100 years. The title of a book by Nobel laureate Ernest Hemingway: For whom the bell tolls. Title of a book by Thomas Hardy: Far from the madding crowd. The poem was published to commemorate   the birthday of Bertha von Suttner on www.peacepalacelibrary.nl in June 2016.

In 2013 Bertha von Suttner became the first woman in history to be honored with a buste inside the Peace Palace. During the late 19th century, Bertha von Suttner, an Austrian author and peace activist, was one of the most prominent members of the international peace movement. In 1905, she became the first female recipient of the Nobel Peace Prize. Around the same time, she played an important role in the coming into existence of the Peace Palace. Hamann, B., Bertha von Suttner: ein Leben für den Frieden’, München, Piper, 1986.

Hanneke Eggels (*Amsterdam) is an independent poet and philosopher with a contemporary and socially-critical view. Sentiment is the arch-enemy of poetry, according to her. She transforms myths from the past to modern  ways of thinking and puts political currents in national and  international context. Her theme is on international level and she spreads a humanistic view.

(In the picture: Drs. Hanneke Eggels next to buste of Bertha von Suttner in hall of the Peace Palace The Hague,  remembering her birthday in 2016)