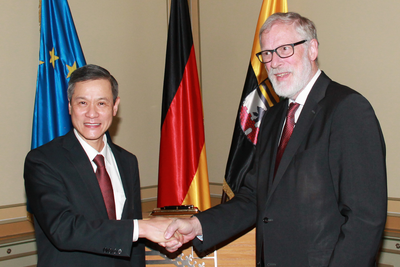 During the meeting, the existing bilateral relations were acknowledged, and the further intensification of contacts were discussed.

In 2018, exports to Vietnam reached a volume of almost 24 million euros, while imports reached a peak of 52 million euros. Since 2004, the Office of the Delegate of German Business in Hanoi has had a State Representation of Saxony-Anhalt, which offers information, advisory, mediation, support and organizational services for companies from Saxony-Anhalt and Vietnam. Delegation trips to Vietnam are also organized on a regular basis. Most recently, Saxony-Anhalt’s Economics and Science Minister Prof. Dr. Willingmann visited Vietnam from 19 to 25 November with a delegation. Two cooperation agreements were concluded.

In the summer of 2019, the Magdeburg Chamber of Skilled Crafts conducted a further training project with vocational school teachers and trainers from companies in Vietnam at its vocational training centre.

In 2013, the town twinning between Wernigerode and Hôi An was concluded, which among other things is characterised by regular mutual citizen meetings and a climate partnership that has existed since 2016.