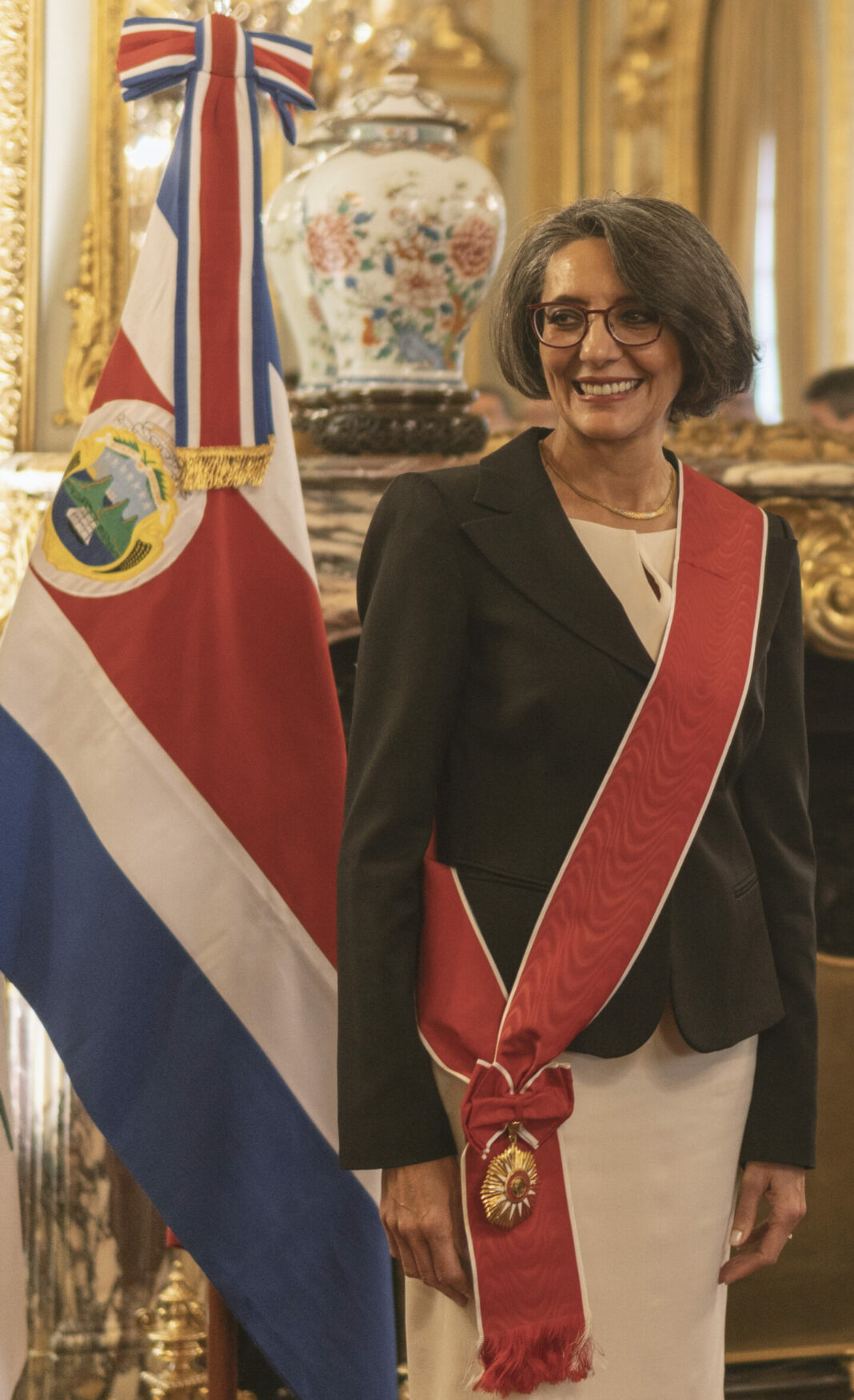 The year 2020 will be a year of dark memories for Costa Rica and for all the countries in the world, suddenly shaken by a pandemic that still continues to leave a trail of deaths, layoffs, stagnation of activities and economic catastrophe.

For the Ministry of Foreign Relations and Worship this year will also be one of sorrow for the parting of valuable people who devoted to us much of their lives, with tremendous dedication, intelligence and discipline. Among them was Attorney Gioconda Ubeda Rivera, during times when she was fulfilling her position as Ambassador of Costa Rica in Panamá.

We gather to remember Mrs. Gioconda with respect and affection, and to dedicate a modest tribute to her memory.  We will also unveil a plaque in her memory, in the office of the Legal Directorate, one of the units of this Ministry that was brightly enlightened by her talent and knowledge and where she worked with great dedication and effort.

Mrs. Gioconda Ubeda was born in Jinotepe, Nicaragua, on December 23, 1959, in the home of Mr. Maximino Ubeda Aráuz and Mrs. Ercilia Rivera Zeledón. She came to this land when she was a child and made it her own, and gave it all. She graduated as a lawyer at the University Costa Rica, and also pursued her Master`s Degree studies in the Latin American Faculty of Social Sciences.

From a very young age, she revealed a great vocation for public affairs, and participated with great enthusiasm in university and national politics.

She entered the Ministry of Foreign Affairs and Worship during the first administration of Mr. Oscar Arias Sánchez, and twice held diplomatic positions in commission. Later, at the time of Foreign Minister Mr. Fernando Naranjo, she took charge of the Legal Directorate of the Ministry of Foreign Affairs.  First on an interim basis and then as the incumbent to the post.  Endowed with an equally quick and analytical mind, she was always eager to strengthen and increase her knowledge of  the law, she carried out this position with special dedication and a great sense of duty and responsibility. In addition to her mastery of Public International Law in general, she placed a special emphasis on the topic of Human Rights, a legal subject that she was passionate about and in which she could render notable services to Costa Rica.

In addition to fulfilling the position of Juridical Director, serving this Ministry, Mrs. Gioconda was commissioned by the President in the Mesoamérica Project, Ambassador in Mexico, Vice Minister from 2013 to 2014, and Acting Minister several times, Ambassador in the Republic of Argentina and lastly, our Ambassador in Panama. In the international arena, it is worth mentioning that she was also Secretary General for the Agency for the prohibition of Nuclear Weapons in Latin America and the Caribbean (OPANAL in Spanish). She shone with her own light in all these positions, demonstrated her great professional capacity, her juridical wisdom, her negotiating talent and her inspiring drive.

She also ventured in journalism and teaching. She was a profesor of Public International Law at the University of Costa Rica and also taught lessons at the Manuel Maria Peralta Institute.

As I highlighted when I learned of her death, Mrs. Gioconda distinguished herself by her dedication and commitment to the country and the Institution, and by her permanent fight for the defense and promotion of human rights. But today I would like to highlight that, in addition to her successful professional performance in this Ministry, in teaching and in all the other activities in which she participated, Mrs. Gioconda was characterized by a deep human sense and great solidarity with her fellow people. She knew how to earn the respect and affection of all the people who worked with her or were her students, for her cordial treatment and charisma, but above all for being genuinely interested in them, her team spirit, her conviction that loyalty and enthusiasm grow naturally when, in addition to duty, affection and understanding prevail.

She endured severe trials in life. A painful family tragedy brutally affected her in highlighting moments of her career, but far from bending and breaking her, it made her renew her fighting spirit and give herself in love and solidarity to those in need.

She was stricken by the disease when she with her usual capacity, was carrying out the position of Ambassador in Panama. She could have retired or withdrawn from office to take care of her health, but that was not in her nature, in her intensely vital character. And she parted from this world last October 21, leaving an admirable example of dedication and commitment, responsibility, love and loyalty to the country.

As I reiterate our condolences to her daughters and her husband Jean Pierre, today the Ministry of Foreign Affairs and Worship pays tribute to Mrs. Gioconda with this symbolic unveiling of a plaque which will perpetuate her name and her contributions, but above all, in doing so we remember this extraordinary woman with respect and affection, we honor the indefatigable fighter that Gioconda Ubeda Rivera was, someone whose example is and will be an inspiration for those of us who work here.