Looking back a century ago,  viewed from today, Sunday December 1st, 2013*, one of humankind greatest achievements was marked by the opening of the World Court.  On August 28th, 1913, to be precise, the court opened her doors to the world for the first time and with the official opening, The Hague became home to the highest judicial institution on earth.

Following nearly a half century of discussion –since 1864 with the sinking of the USS Alabama by the USS Kearsarge during the US Civil War- over the need for the creation of such a judicial entity to be commissioned with the settlement of  disputes through legal arbitration at the international level; her mission was set to begin. Today, the Court is also home to the International Court of Justice (ICJ). The latter, is one of the six principal organs of the United Nations and to date, the ICJ has issued approximately 150 judgments and offered numerous advisory opinions to the UN Security Council.

With the opening of the World Court, Andrew Carnegie’s lifelong dream took form, as is  described in “The Dreamer”, the article written for us last summer, by Dr. Willem Post, for the first issue of Diplomat Magazine.  The Peace Palace was financed by Andrew Carnegie, the Scottish-American industrialist, who is remembered today for having been the most well known philanthropist of his age.   In his words and writing at the time; he often referred to the Court as a “Temple of Peace.”  Carnegie was a man whose life was marked by an unwavering thirst for peace, repeatedly saying that, “peaceful arbitration is one of the few causes for which it not only justifiable, but a duty to champion.”, H. Stuart 2013.

Thanks to the generous support from the media, both here in The Hague and beyond; the thoughtful input which has been freely offered from persons employed by the many NGOs in our community and the many contributions which have been received from both international volunteers in academic circles and other citizens of goodwill; promotion of public awareness of the Peace Palaces’ noble achievements of the last century to the widest public has been made possible.  Here, in The Hague, we as look to the future, we continue to be inspired by Andrew Carnegie.

In June, 2013, diplomats and selected Dutch citizens were moved, during the yearlong centennial of the PeacePalace, to found Diplomat Magazine (DM), the first official diplomatic magazine in the Netherlands.  Honorable Steven van Hoogstraten, general Director of the Carnegie Foundation (Peace Palace) and Treasurer of the Hague Academy of International Law together with the Mayor of The Hague, Mr. Jozias van Aartsen were the guests of honor at the reception held at the Carlton Ambassador during the  launch of the magazine.  Many accredited ambassadors and diplomats to the Netherlands, members of Parliament and distinguished representatives from the academic sector were also present. 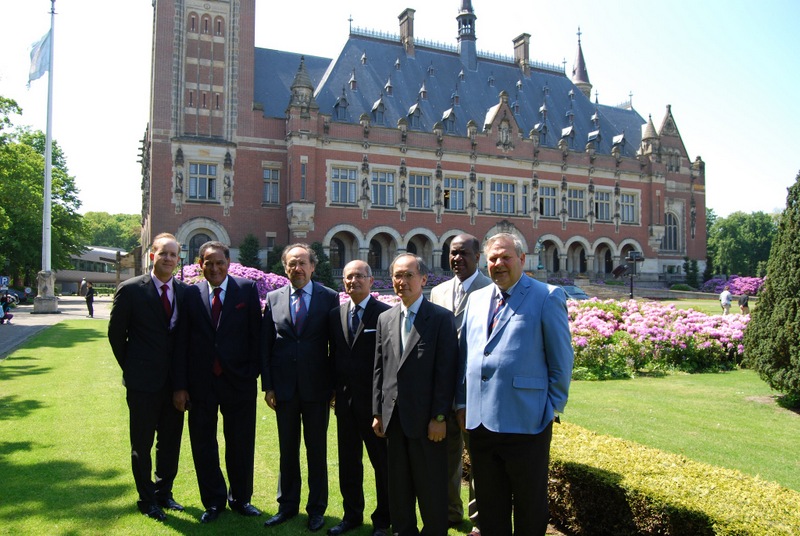 But as novel ideas often serve to inspire others towards creativity and change, in the City of Peace and International Relations, a “newborn” to promote The Hague is now enchanting the diplomatic corps, members of international organizations and selected Dutch citizens.  This newly organized institution was very recently founded by Mrs. SBB and former Miss Dominican Republic, Mayelinne De Lara. It has been baptized in the Kingdom of the Netherlands as Diplomat Club The Hague (DCH).

There is no doubt that the Vredespaleis was a source of inspiration for her as well, as Mrs. SBBlives behind the Peace Palace. To be more precise, her residence is located directly across the street, at Carnegielaan 11, a symbol for —Son meilleur voisin ? His Excellency, Monsieur Pierre Ménat, Ambassadeur de France.

Every morning, Mrs. SBB awakens to a view of Peace Palace silhouetted against a softly illuminated sky and, with the day’s dawn, is inspired by Mr. Carnegie’s vision and optimistic determination to use arbitration of international disputes to bring about world peace.

The Hague is proud to welcome Diplomat Magazine and Diplomat Club The Hague, two newly organizations, whose members are working closely together as volunteers, to advance the lofty goals of world peace through diplomacy as articulated by Mr. Carnegie, more than a century ago.  Both DM and DCH are founded as stichtings, non-profit organizations  promoting les relations internationales et la diplomatie dans un milieu de détente et d’informalité.

Recently, they have partnered with local authorities, to successfully promote the  Vredespaleis’ magnificent centennial.  In the years to come, they will continue with their stated goal of educating the public about the work of the PeacePalace and, in the process, it is hoped that the Court’s mission and work will become better known and more understood by the world’s peace minded citizens everywhere.

Before extending my seasons* greetings and wishing all of you the best for 2014, please open the following links with more info about Diplomat Club The Hague and images when Publisher Robert Buurke, Associate Editor Roy Lee and the subscriber were invited on August 28th to the centennial commemorations. https://diplomatmagazine.eu/dc/

* December 1st, 2013, is special for the author, the birthday of his beloved son Paul Matos (15), currently in Ottawa, Canada, and date of the 6th edition of Diplomat Magazine.