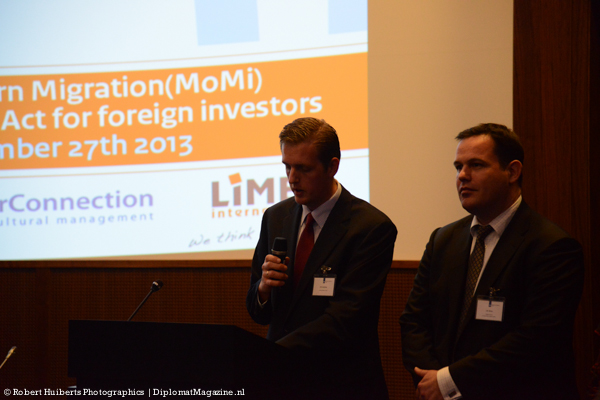 On Wednesday 27 November, a seminar took place which focussed on MoMi, the Modern Migration Policy Act for foreign investors and the preferential treatment of skilled migrants. The European Investment Council (EIC), under co- chairman, Nico Leerdam, co-organised the seminar with the Ministry of Security and Justice, Interconnection and Limes International, and the Dutch Chinese Young Entrepreneurs and their chair, Mrs Bonnie Xie.

H.E. Mr. Fred Teeven, State Secretary of the Ministry of Security and Justice, delivered the keynote address at the event. Teeven expounded on MoMi, seen by many as his brain child, and invited the audience, and also the general public, to come forward with recommendations and constructive criticism.

Interconnection explained their expat-related activities, while Limes International called for a closer cooperation between the stakeholders involved in migration.

One of the prominent delegates was Dr Van Eekelen, a former government minister who attended with his wife. Van Eekelen hailed Mr Teeven for placing MoMi in the public domain for discussion. He stated that never before has a policy act for foreign investors been discussed in this way.

Evaluation of the effectiveness of MoMi will take place next year and the EIC can look back on a successful seminar.