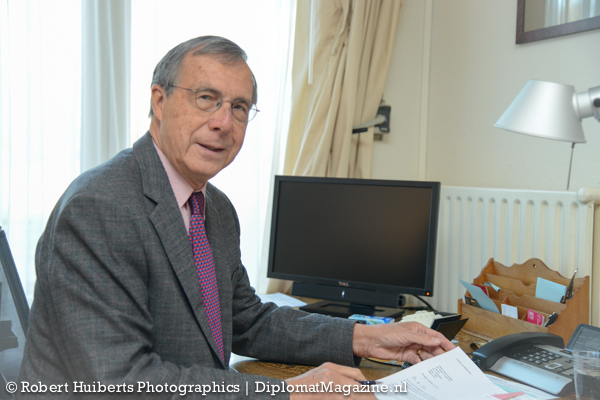 The trend has been persistent and unmistakable for some time and cannot be entirely  disregarded. Right or wrong, it is an indisputable fact that there is a certain degree of euroscepticism in The Netherlands. The number of Eurosceptics may not be overwhelming, but  they are becoming increasingly vocal. A perfect moment to ask Mr. Laurens-Jan Brinkhorst, former diplomat, seasoned former Dutch politician and firm supporter of the European Union , to share his views on this subject. Mr. Brinkhorst may no longer be active as a politician or a diplomat,  but he still maintains a busy work schedule and maintains  an office in The Hague, where he welcomes us.

“I just returned from a trip to Taiwan and I was fascinated by the dynamic atmosphere in that country. The  world is getting smaller and we have to reset our thinking and start acting together, otherwise we will become irrelevant. Personally I do not believe we  have come to the end of 300 years of European dominance, but  I do  regret that the idea persists that we are going to lose our identity and that we will all be unified  in one  European Superstate. This is because lack of knowledge and yes, because of lack of information, then it becomes easier to fall prey to populism. Left and right of the political center. We have a restricted view of the European Society and tend to view it solely in an  economic perspective, but European political values are also important. We tend to be  much too  inward looking. Just the other day Minister Asscher, referring to the potential influx of Romanian immigrants, stated  that ‘The Netherlands is the best country in the world,’, but what about Spain? What about Ireland? These countries have made tremendous progress.”

“Fundamentally nothing is really wrong with the Dutch economy. What is worrying is the Status Quo-attitude, represented by the Trade Unions and the politicians, which prevents  us to innovate. For instance the objective of increasing the pension-age to 67 years, was achieved with such heavy opposition, but there should be a sense of adjusting to the future. Today four working people support one  pensioner. 30 years from now that ratio will be down to two  working people supporting one  pensioner. That is anti-social. This burden cannot be borne by the younger people. In politics today everybody gets something, but nobody gets enough, so nothing really happens. Change has to come from outside. Long before we had the Euro we used to revalue  our currency in line with the Deutsche Mark every year and we did not give up our sovereignty. The one time we did not follow the Deutsche Mark, we had 10 years of inflation.”

2. What would happen if the UK decided to leave the European Union?

“That would have very  negative consequences , for Europe, but in the first place  for  the UK.  There is a lack of politicians with courage.  The most bizarre statements are being made and I worry about the fact that nobody stands up. To quote the late US President Roosevelt: ‘We have nothing to fear, but fear itself.’ We have been in this crisis for 5 years now.  Look at the US today, 5 years after the start of the crisis,  they are gung-ho, whereas   we, in Europe,  have enormous  self-doubt. The fact remains that we need each other. I was  in London on  the day, when Prime Minister Cameron made the statement, that  there would be a referendum on the  EU. I will not disclose his name, but a leading Tory said to me:’This statement of Cameron is the statement of a man, who will lose the next election.’”