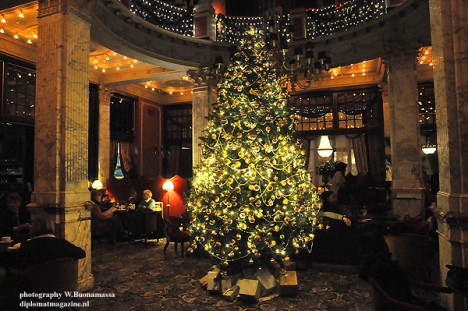 On Saturday 7 December Hotel Des Indes, a Luxury Collection Hotel has opened the Festive Season with the ignition of the Christmas tree in the hotel (see picture above). Every year the hotel undergoes a transformation with Holiday decorations ranging from floral arrangements, Christmas lights and an enchanting Christmas pine in the hotel’s restaurant or lounge.The guests arrived along a lane of fire torches, where the scent of freshly roasted chestnuts and apples entered their noses. Hotel Manager Rem Bastiaens welcomed his guests with a glass of glühwein around ‘the Rotonda’, overlooking the hotel lounge. After a short but inspiring speech, the lights were ignited and this marked the official start of the Hotel Des Indes Festive Season.

From Robert Buurke. The Hague, 18 th of December 2013.On Wednesday 18th of December 2013 The Rotary Club Metropolitan The Hague organized a fundraising concert in The Our Savior Church. After an opening speech of H.E. Mr Maris Klisans the Latvian Ambassador in The Netherlands, a very beautiful concert of both Latvian as well as Christmas songs was performed. This concert has been made possible with the help of Ikea, The Underground, Sligro and Diplomat Magazine.

Xmas Party at the Kurhaus

For pictures about this event please click here: http://www.flickr.com/photos/98057281@N02/sets/
His Excellency Mr. Key Cheol Lee, Ambassador of the Republic of Korea, hosted a very unique lunch honoring the Veterans of the 1950—1953 Korean War. The lunch  was attended by 170 guests in total, many of them veterans, proudly wearing their uniforms.  Various VIP’s  also attended the lunch, such as  Mrs. Hennis-Plasschaert, Minister of Defense, Dr. Song, President of the ICC and Mrs. van Miltenburg, Chairman of the Lower House of Parliament. Ambassador Key Cheol Lee passionately and tirelessly strives to increase public awareness in The Netherlands for the Korean War Veterans.
_________________________________________

On the occasion of the celebration of Fifty years of Independence of the Republic of Kenya, H.E. Mrs Rose Makena, Ambassador Extraordinary and Plenipotentiary of the Republic of Kenya invited Head of diplomatic missions and special guests to the Crowne plaza Hotel on 11 December to celebrate Kenya’s Independence Day.  Ambassador Makena first requested the distinguished guests for one moment of silence on behalf of former President and anti-Apartheid leader Nelson Mandela, who passed away recently.

In the end of her speech Ambassador Makena wished happy holidays season.  The event was very well attended with excellent food, drinks and canapés from Kenya.

The Hague Bridge walk in Kijkduin

For pictures about this event please click here: https://picasaweb.google.com/PersonalVietnamTravelTeam/December112013HaagseBrugWalkWithJosNusseDenHaagGreeter?authkey=Gv1sRgCNDJ5fmEser-ywE&feat=email
These beautiful photos were taken by Martin Cup, for which our great thanks.

On Monday 9 December, H.E. Haifa Aissami, Ambassador of Venezuela, in collaboration with the Asociacion Hispanica, invited members of the diplomatic corps and special guests to enjoy the screening of Zamora. The film chronicles the life of Ezequiel Zamora, a man who fought for the dignity and the emancipation of oppressed peoples in the mid-nineteenth century in Venezuela.This is the first historical film that expose the events occurred during mid XIX century with one of the most popular Venezuelan leader of that century.

His Excellency Dr. Virachai Plasai, Ambassador of Thailand and his charming wife Elizabeth, hosted a reception on the occasion of the 86th birthday of His Majesty King Bhumibol Adulyadej. Addressing the numerous guests present Ambassador Plasai mentioned several interesting facts about his country, such as the hugely succesful automotive industry, which currently ranks amongst the top-10  in the world. Moreover 21 million tourists visit Thailand annually. Thailand’s  economic growth rate for 2013 was projected at 3%. However, the IMF has increased this number to a healthy 3,5%.
____________________________________________

On the occasion of the 42nd Anniversary of the United Arab Emirates National Day the young, new Ambassador Abdalla Hamdan Alnaqbi hosted a reception at the Steigenberger Kurhaus Hotel in Scheveningen. As is well known the oil reserves of the Emirates are ranked as the 7th largest in the world. Its natural gas reserves are the world’s 17th largest. This has contributed to the success of the UAE and the fact that they are one of the most developed economies in Western Asia. The very well attended reception was followed by a lavish dinner buffet.

Her Excellency Mrs. Ireny Comaroschi, Ambassador of Romania, hosted a reception on the occasion of the  National Day of Romania  and treated her guests to  a concert by Romanian artists Teodora Enache and her musicians. The venue was the magnificent Townhall of Wassenaar, ‘De Paauw,’ the former residence of the Dutch Prince Frederik  in the 19th century. In her speech the Ambassador mentioned the fact that The Netherlands is the biggest investor in Romania. She concluded by wishing her many guests a Merry Christmas and a Happy Holiday season. Voluteer Pictures Robert Buurke, Publisher.

By Bonnie Klap. Fridaynight  His Excellency Mr. Franz Josef Kremp, Ambassador of Germany,  hosted a cocktailparty in his residence Huis Schuylenburch to introduce  Judge Bertram Schmitt, the candidate of Germany  to the International Criminal Court 2014 elections. Many members of the Diplomatic Corps and international organizations attended. Mr. Bertram Schmitt has been an ad hoc Judge at the European Court of Human Rights and is also an honorary Professor of criminal law  at the University of Würzburg. Since 2005 Mr. Schmitt is a Judge at the “Bundesgerichtshof,” Germany’s highest Court of Justice.

For more pictures about this event please click here: http://www.flickr.com/photos/98057281@N02/sets

The Ambassador of the Sultanate of Oman to the Kingdom of The Netherlands, Muhammed bin Harub Al Said, hosted a grand reception on the occasion of the 43rd National Day Anniversary. The Ambassador started his speech in excellent Dutch, which impressed not only the many Dutch guests, but for which he received ample praise from former Prime-Ministers Professor Jan Peter Balkenende and Professor Andreas van Agt, both guests of honour this evening. Hundreds of guests had come to congratulate the Ambassador underscoring the importance of the bilateral relations between Oman and The Netherlands.

The Chargé d’Affaires a.i. of Lebanon, Mrs. Abir Ali,  hosted a reception on the occasion of the Indepence of Lebanon. Although the weather outside was cold and rainy, the room in the Crowne Plaza Hotel was overflowing with guests and the reception was extremely well attended. Mrs. Abir Ali impressed some Dutch guests by bravely  speaking Dutch. No mean feat considering the difficulty of the language and the fact that she arrived in The Netherlands just  9 months ago.

Charge d’Affaires Adam Sterling and the Political-Economic Section of the U.S. Embassy hosted a Fall Borrel on November 18.

November 15 is a special day for the Belgian Monarchy. Since 1866 the day has  been marked by celebrations in honor of the Belgian Monarch. The tradition was started by King Leopold II, who was the second King of Belgium. On November 15  His Excellency Mr. Frank Geerkens, Ambassador of Belgium to The Netherlands, hosted a reception at his residence to celebrate King’s Day. The reception was attended by a great number of guests, amongst whom several well-known Dutch politicians.

For more pictures about this event and other diplomatic gatherings please click here: http://www.flickr.com/photos/98057281@N02/sets/

By Roy Lie A Tjam. Last Monday 11 November, the Republic of Angola celebrated its independence and this important occasion marked by a night of splendour on 14th when Dr Luis José de Almeida doyen of the Angolan diplomacy, Ambassador for Angola and Mrs Almeida hosted an important gala dinner in the grandeur of the Steigenberger Kurhaus Hotel. Ambassador Almeida gave an insightful update on the progress Angola has made over the past 38 years since independence. He addressed the delegates on the May preselect, including education, health and infrastructure policies. Angola: ‘Rumo ao Progresso’ she is indeed surging ahead and the Republic looks unfazed to her future! The guest of honour at the festivities was Mr. Paul Staal, Dutch consultant and a key leader in the 1960’s and 70’s of the activist movement Angola Comité, which fervently supported the Angolan struggle for independence. The special guest at the dinner was the representative of the Angola Steel Corporation, Ms.Almeida. The programme included a wonderful interactive musical performance by the renowned Angolan ensemble Kilandukilu Angola, who flew in especially for the celebrations.

Click here for pictures about this magnificent event: http://www.flickr.com/photos/98057281@N02/sets/

The Embassy of the Republic of Indonesia in cooperation with Jakarta City Government and Culture Office and Garuda Indonesia organized a Press Conference in the prestigious Grand Hotel Krasnapolsky in Amsterdam, followed by a Cocktail gathering and a fabulous Gala Dinner. Indonesian dancers in colorful  costumes provided  entertainment and a spectacular fashionshow was also part of the programme. Her Excellency  Mrs. Retno Marsudi, Ambassador of Indonesia, delivered  a speech in which she mentioned the promotion of  tourism as one of the top-priorities of Indonesia.