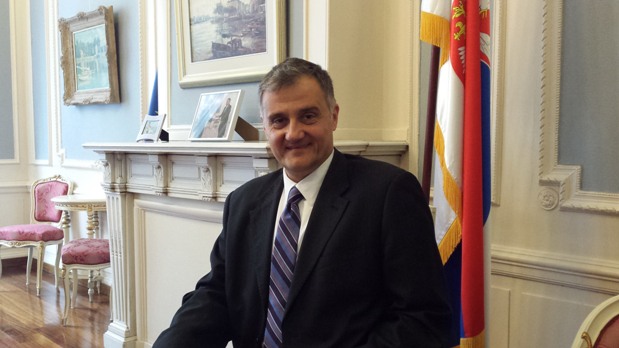 By Petar Vico, Ambassador of the Republic of Serbia in the Netherlands.

The Republic of Serbia or Република Србија (the name of our country written in Serbian language – Cyrillic script) is a country located in the central part of the Balkan Peninsula. Due to its unique and strategically sensitive location, bridging West and East, Serbia has been often referred to as the crossroads of Europe or the gateway of Europe. During the history, this geographic position was not always a blessing, since many wars swept through Serbia. In today’s new Europe of peaceful nations and collaboration, this unique position offers many opportunities and possibilities.

Even though our history has been more than turbulent, thanks to our perseverance and determination, Serbia has endured and has become a stable country and a reliable partner. Many reforms have been implemented and Serbia has grown into one of the premier investment locations in Central and Eastern Europe. In the period between 2005 and 2013, Serbia has attracted more than €12 billion of net foreign direct investment. Many world-renowned companies have recognized Serbia’s potential and decided to locate their operations in the country. Serbia offers favorable geographic position, customs free access to 15% of the world markets, a highly qualified, hard working and skilled work force, competitive tax rates and low costs.

The Netherlands is among those countries that have significantly invested in Serbia during last years. Our bilateral relations, established more that 120 years ago, have improved remarkably over these years, with a very high degree of mutual understanding. The Netherlands, through different bilateral and multilateral programs and projects, provides very important assistance in Serbia’s euro-integration process. Foreign Minister Timmermans visited Serbia in October last year and had fruitful talks with our Deputy Prime Minister Vucic and Foreign Minister Mrkic. During his visit, Minister Timmermans announced the visit of a Dutch business delegation, which will explore all possibilities for future cooperation and further investments. We expect the delegation to come to Serbia in May this year, during the most important regional Agricultural Fair in Novi Sad, where the Netherlands will be a partner country.

It is well known that the EU membership is our strategic foreign policy priority. Serbia has signed the Stabilization and Association Agreement with the EU in 2008 and was granted candidate status in 2012. The accession negotiations were formally launched on January 21, 2014 with the holding of the first Intergovernmental Conference. We are fully committed to the fundamental ideas, values and achievements the EU is founded on and are ready to assume all the obligations of the EU membership. The accession process itself will give a huge boost to the political and economic reforms in Serbia in the years to come, helping us to improve and modernize our legal, economic and institutional system.

Unlike the previous candidates negotiating the EU accession, Serbia is in a specific situation. In good faith and wishing to find sustainable and long-term solutions that will benefit the lives of everyone in Kosovo and Metohija, Belgrade participates in a high-level dialogue with Pristina. The most significant achievement, after more than 20 meetings in Brussels, is the First Agreement of Principles Governing the Normalization of Relations between Belgrade and Pristina, signed in April 2013. Belgrade is fully committed to the normalization of relations with Pristina, but it is necessary to bear in mind that the dialogue in Brussels is of a status neutral character. Our desire to normalize relations and to resolve the issues of vital importance for all people in the Province does not mean a change of our position regarding the non-acceptance of the unilateral declaration of independence of Kosovo. Therefore, the status-neutrality of the UN and UNMIK in line with the UNSC resolution 1244, as well as the continued presence and role the international community embodied in KFOR and EULEX, retain a particular importance in view of the on-going dialogue.

Serbia will chair the OSCE in 2015, as part of a joint candidature with Switzerland, which is chairing the organization in 2014. We remain confident that Serbia will be able to make a specific and constructive contribution to the strengthening of the Organization, particularly bearing in mind that 2015 will mark the 40th anniversary of the adoption of the Helsinki Final Act. Regional approach represents a special dimension of Serbia’s cooperation with the OSCE.

Serbia attaches particular importance to the development of cooperation with the countries of the region, with the aim of ensuring and enhancing stability and promoting good-neighborly cooperation. Serbia wishes to be a factor of peace and stability in the region. We advocate security, stability and good relations. All misunderstandings, all open questions have to be solved peacefully and through cooperation. We want good relations, through mutual respect of sovereignty and territorial integrity of each and every state.