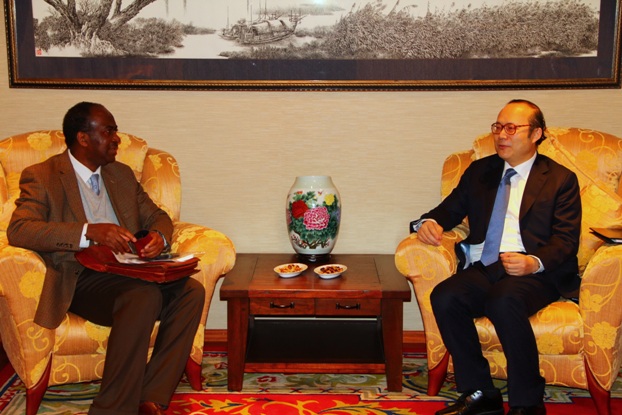 Diplomatic causerie – with the People’s Republic of China, member of the UN, G20, APEC and other international organisations.

It was a pleasure to be welcomed by His Excellency Ambassador Chen Xu of the People’s Republic of China on a courtesy call. Ambassador Chen Xu proved to be a hospitable and charming diplomat. 2013 has been a year of numerous highlights as China looks back in order to surge further ahead.

The ongoing growth of China’s economy.

Profound reforms were initiated by the 18th Party Congress held in November 2012, and further elaborated by the 3rd Plenary Session of 18th CPC Central Committee held in November 2013. China is conscious of the fact that she has not yet achieved all her economic goals: ‘We are grouping stones while crossing the water’ says Chen Xu. ‘You can also say, we are busy digesting our economic boom’. China’s economic health has had a major impact on the world economy. China has also conceded that it is not easy to have a policy that will please every individual. Finding the appropriate management for our mega market is of paramount importance, observed the Ambassador.

According to Ambassador Chen Xu, his country has known 30 years of high-speed progress. However, maintaining the momentum is far from easy. The Chinese economy has improved performance and made significant achievements. In 2013, China’s gross domestic product (GDP) grew by an enormous 7.7%. Over 13 million new urban jobs were created.

In 2014, agriculture will continue to be one of China’s priorities. China has 800 million farmers of which 200 million are drifting in the tremendous process of urbanization. Ambassador Chen Xu states that ‘Every citizen has within him the potential to retain our economic momentum, and every citizen should be entitled to benefit from China’s development’.

China states that it stands for peaceful development and when embarking on business ventures, focuses on a win-win situation. Fortunately, we are today living in an era where peace and development remain the main theme of world politics compared to previous years.

China also looks to political solutions, often initiating a national reconciliation process. The recent sshipments of chemical weapons material out of Syria have had naval escorts provided by the People’s Republic of China, alongside Denmark, Norway and Russia, its partners in this operation.

The Sino–Nippon relationship is unfortunately at its lowest point following the visit of the Japanese Prime Minister to the war shrine at Yasukuni. China feels that PM Shinzo Abe’s visit to the Yasukuni Shrine grossly violated the principle and spirit of the four political documents between China and Japan, and broke the commitment and promises of previous Japanese governments and leaders on the issue of history.

Chen Xu was in China when PM Rutte visited the country. Rutte was the first European political leader to meet China’s top party leadership after the historic 3rd Plenary Session of 18th CPC Central Committee held in November 2013. Other significant visits which took place in 2013 included the Head of the Koninklijke Marechaussee and the Deputy Commander-in-Chief of the Chinese Army A.O.

China is aware that it could benefit from Dutch experience on areas such as water management and aagricultural advancements. China is considering revamping the old silk route which originated in Western China and entered Europe via Turkey. The route led to Rotterdam, as well as the rest of Europe and to Africa. There are actually two silk routes, one over land, the other was a maritime route.

Chen wishes to see a stronger tie between China and Europe, starting with the Sino-Dutch relationship. We see Holland as a geographically small country but one which holds an important position in Europe, says Chen Xu.

Following the Chinese New Year celebration, Ambassador Chen Xu and his staff are now increasingly focused on the upcoming NSS 2014. A top level Chinese delegation will be participating in the NSS 2014. Certainly, China is getting ready for the summit in The Hague. The area in the vicinity of the Chinese Embassy is being prepared to facilitate the activities that will be taking place at the World Forum.