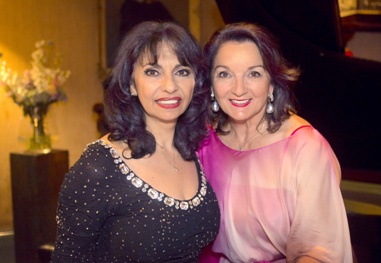 On 6th of July the great Dutch/International singer Laura Fygi gave a wonderful concert at Kasteel De Wittenburg. Laura has performed throughout Europe, South America and Asia. As a Dutch singer, she even managed to conquer the Chinese market! “I’m always on the lookout for something new, because I don’t think one should repeat oneself” she told me. That willful quest for renewal has rendered collaborations with such music luminaries as Toots Thielemans, Michel Legrand and Michael Franks. Laura has also been presented with various gold and platinum discs and awards, as well as playing the lead role in Singapore of her favorite musical Victor/Victoria.

Meanwhile she signed a contract with one of China’s largest record companies and recorded the CD Flower specifically for the Asian market. It contains original Chinese compositions that Laura had arranged in her own style. Some songs were translated into English and French, but she also sings four songs in the original Chinese!

What is the secret of her success? It is the combination of a number of things. First of all she has a husky voice with a beautiful diction and great timing, which has already been compared to that of Peggy Lee, and the intimacy of Julie London. She has an international appearance that enables her to perform in Ronnie Scott ‘s Jazz club in Soho with the same ease as on the biggest stages in most of the world cities. She looks beautiful and is as Latin as Jazzy. But the most important thing Laura is a storyteller, someone who knows how to turn a song into a story that touches you directly from her heart to yours. While it still swings like crazy!