Challenges and Opportunities of Georgia’s Path towards Europe’s Institutions 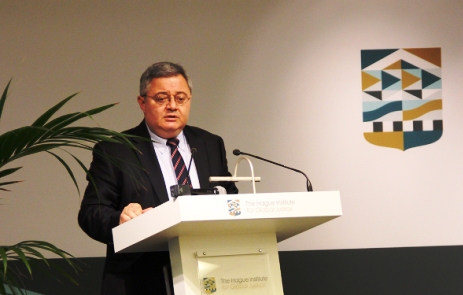 Mr. Usupashvili first started by addressing the recent events around the domestic politics in Georgia, in which he stated that an internal issue within the Georgian political arena will not affect foreign policy and that Georgia will continue its course towards increased integration with the EU and NATO. He added that the change of the pro-Western coalition had not changed Georgia’s course and thus, linked with historical ties, will not happen.

Furthermore Mr. Usupashvili stated that the current coalition preferred peaceful relations with the Russian Federation, above the tenser situation Georgia found itself in, with the previous government. In the matter of the recent proposal from Russia to incorporate the de-facto government of Abkhazia into the Eurasian Economic Union, Mr. Usupashvili announced that this would be harmful strategy to pursue, as the other members would surely decline this, due to the disputed status of Abkhazia.

Armenia’s entry into this Union is a great concern to Mr. Usupashvili as he does not believe to the highest priority of many Armenians. He believed that it would conflict with the Armenian interests, as the Russian Federation tries to benefit from the conflicts Armenia is involved in. Moreover, he added that nothing would change with regard to relations with Armenia, Turkey and Azerbaijan

In the matter of the recent developments in Ukraine, Mr. Usupashvili showed great concerns, considering Georgia’s similar problems with the Russian Federation. He believed that the situation would work out negatively and feared further escalation regarding Abkhazia. These events also affect Georgia in economic sense, as investors fear instability in the region. Despite the negative events Mr. Usupashvili noted that there was a continual rise in the tourism sector.

Finally, in the Q&A session Mr. Usupashvili stated that the European presence in the region should be maintained, and in case that this would fail to happen, that this could show a sign of decreased interest in the Georgian case from the European side, resulting in more invasive actions from Russia.