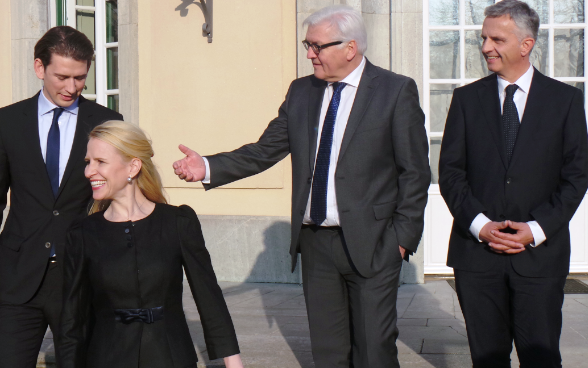 The foreign ministers of the Federal Republic of Germany, the Swiss Confederation, the Republic of Austria and the Principality of Liechtenstein recently participated in an informal meeting in Berlin (26-27 November 2014).

The rationale behind such meetings is the shared German language, and the notion of unity that comes with it. The ministers listened to the first “poetry slam” to promote the German language (ironic enough with an English-language name). The contributions by various German-speaking artists might have sounded to non-German speakers rather like a modern music creation. Changing between fast, slow, high and low, the artists knew how to use their mother tongue that unites the four European countries and plays an important role in diplomacy as the most spoken native tongue spoken in Europe.

Host this year was Germany. The meeting repeats annually, and allows the ministers to discuss issues of mutual interest as well as of the international arena.

In 2015 Switzerland is to host the meeting in Neufchâtel; hometown of Foreign Minister Didier Burkhalter.