Unveiling of Cyrus Cylinder replica at the peace palace 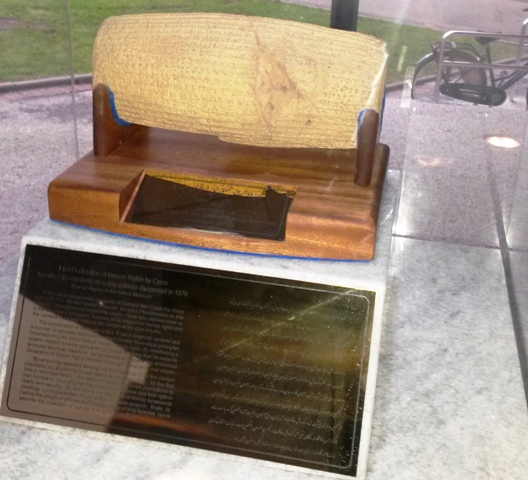 Clay cylinder, as a gift of the Government of the Islamic Republic of Iran was presented to peace palace and was placed in the Building of the Hague Academy of International Law.

Ambassador Jahangiri , at this ceremony , delivered his speech and noted that the Cyrus Cylinder is known as the heritage of tolerance and peaceful coexistence , respect for human dignity and freedom of religions, repatriation of displaced people and humane treatment of the Babylonians which was reflected on the clay Cylinder,  has led many scholars to call it the first Charter of Human Rights. He emphasized that both Athenian Democracy and Cyrus’ Proclamation would be only two drops in the vast ocean of human rights aspirations. Only then could the ambiguity surrounding the universality of human rights be removed.

In his speech, Prof Yves Daudet mentioned that “The universal nature of human rights has already been presented in Cyrus’ text, which has thus become a real common property of humankind. Thanks to the Government of the Islamic Republic of Iran for her gift to the Carnegie Foundation and The Hague Academy of International Law which we are happy to house the sight of the splendid Cyrus Cylinder on our premises. He added that what is fascinating us, is that the themes were developed by Cyrus at that time when they were already well-established in Persian culture but were still totally unknown in western culture. These themes were the abolition of slavery (which took so long in the west) and the right for freed slaves to return home, the free choice of religion and its practice, the free choice of a profession, property rights, and the restoration of despoiled or destroyed goods.

Mr. Hoogstraten, General Director of the Carnegie Foundation at his speech stated that we are very glad to receive this gift, knowing that it has an important and even unprecedented historical meaning and describes the situation which the declaration was issued. As we know in this declaration “A King whose military power was basically unlimited, lays down some rules for the conduct of himself as the ruler. He agrees with the principle of respect for diversity in religions. He frees the prisoners, he sends the conquered people back to their homeland.