Letters of credence from Timor-Leste 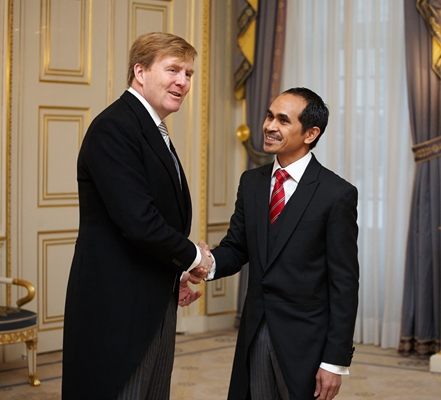 Ambassador Joaquim António Maria Lopes da Fonseca presented his credentials as non-resident ambassador to the Kingdom of the Netherlands on 17 December 2014.

The East Timorese mission is based in London but also responsible for The Netherlands. The Democratic Republic of Timor-Leste (East Timor) is a country in maritime Southeast Asia.

The country first declared its independence in 1975 but was subsequently invaded and annexed by Indonesia. In 1999, following a UN-sponsored act of self-determination, Indonesia relinquished control of the territory, and East Timor became the first new sovereign state of the XXI century on 20 May 2002. After regaining independence, Timor-Leste became a member of the UN and the Community of Portuguese Language Countries (CPLP).