The Sharq Taronalari Festival Brings People and Cultures together, statement by H.E. Shavkat Mirziyoyev President of the Republic of Uzbekistan.

The aims and objectives of the festival are to popularize widely the best achievements of national music art, to preserve and develop great traditions of peoples, to encourage talents in the musical- and vocal sphere, as well as to spread in further international creative ties, to strengthen cultural friendship and ideas of mutual sympathetic.

The first International Music Festival “Sharq Taronalari”, took place in 1997 where musical groups and performers from 31 different countries participated. Today, it became one of the most popular and famous festivals not only in Central Asia but also far beyond. The significance of this year’s festival is the ever-increasing number of the artists from a broader geographical range of participating countries, and the prevalence of fine artistry in an array of forms such as music and dance level of participants.

The XI Sharq Taronalari Festival took place as it were under the watchful eye of the father of the Uzbek nation, the great Amir Temur. His monument is prominently situated in the center of town, he observed the participants of the Sharq Toranalari festival passing by.

The festival was held from 25 – 30 August 2017 at the renowned Registan Square. This year, Samarqand hosted 241 artists from 58 countries. Besides performances and competitions, the program included a scientific conference, held from 26-27 August  2017 providing opportunities for countries to exchange their expertise and cultural talents.

H.E. Mr. Shavkat Mirziyoyev President of the Republic of Uzbekistan started his opening address by observing that the Sharq Taronalari Festival gains a high prestige. He recounted, “Art is a means of expressing aspirations, joys and cares, inner experiences. Music is especially strong at that, the language understandable for everyone. Music acquaints and brings peoples and cultures closer, establishes a strong spiritual connection between them. All those visiting  Samarqand today can feel the festive, friendly atmosphere reigning in the city.”

The President continued, “…the Sharq Taronalari International Music Festival, founded on the initiative of the First President of our country Islam Karimov 20 years ago, is now held for the eleventh time.”

Moreover, the President of Uzbekistan Shavkat Mirziyoyev stressed: “In the present extremely difficult time, when various challenges and threats are intensifying in the world, as well as confrontations, the role, and importance of musical art increases, which without interpreters unites millions of people of different nationalities, languages, and religions, further strengthen the bonds of friendship, cooperation and harmony. In this regard, the Sharq Taronalari International Music Festival, which this year marks its 20 years, acquires a special meaning.”

The Grand Opening Ceremony of the festival carries on with a captivating spectacle by directors, choreographers, designers, and artists with performances of dances and songs. An unforgettable evening, a symphony of colors, sentiments, and illumination at the Registan square which was converted into an amphitheater. The Grand Opening Ceremony concluded with fireworks and a lavish Gala-dinner at a nearby venue.

The Performances and Competitions

The performing arts competition of the festival commenced in Registan Square on Friday, the 25th of August, where participants competed for the title of the best performance of a national song and instrumental music. The following countries performed on the first night: Afghanistan, Greece, Germany, Azerbaijan, Nepal, Kazakhstan, Belgium, Russia, and Uzbekistan. An independent International Jury was put in place to judge the competitors. The following awards were established by the Festival Organizing Committee for the winners of the Competition:

The following Prizes were also awarded:

Prize of the Minister of Culture went to Gulistan Temirxanova (Uzbekistan),

Prize of the Directorate of “Sharq taronalari” went to La Banda Moriska (Spain),

Prize on behalf of the Samarkand Mayor went to Palvan Khamidov (Turkmenistan), and the

A prize of the jury went to Bissenbek Toleubayev (Kazakhstan).

The theme of the conference – “Formation and development of national traditions in the musical cultures of the peoples of the East”.

The welcome address of the conference was by Mr. Bakhtiyor Sayfullaev, Minister of Culture Republic of Uzbekistan and Mr. Furkat Rakhimov, Mayor of Samarkand city. The moderator was Prof. Rustombek Abdullaev. 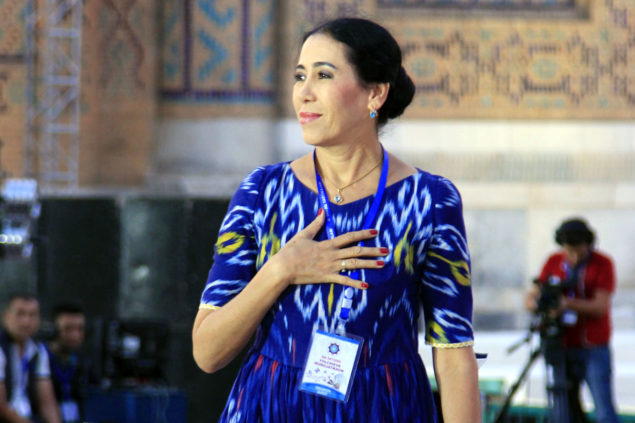 Participants of the conference:

Additionally, The Mayor of the municipality of Samarqand Mr. Furkat Rakhimov along with the Uzbekistan association of Journalism hosted a networking luncheon for visiting and local members of the media at the signature Samarkand Restaurant. The mayor personally presented each visiting media members with a gift.

Organization of the festival

The Sharq Taronalari Festival  is organized by a multitude of organizations and institutions such as Ministry of Cultural and Sports Affairs of the Republic of Uzbekistan, Samarkand Regional Municipality Concert Association “UZBEKNAVO”, National Television and the Radio Company of Uzbekistan, the Union of Composers of Uzbekistan and assisted by UNESCO

Kudos to the organizing body of this mega festival, they deserve special recognition and gratitude for all their hard work. They have sponsored professors and students of the Samarkand State Institute of Foreign languages to be guides-interpreters in ten languages. They certainly have done an excellent job. Mr. Tukhtasinov, the rector of the Samarkand State Institute of Foreign Languages, emphasized. “Master classes have been conducted to upgrade their skills in the history and culture of Uzbekistan, the history, and significance of the Sharq Taronalari Festival.”

Special thanks to the numerous workers behind the scene such as Mr. Husniddin Ato Consultant of the International Music Festival “Sharq Taronalari” and his team for their relentless services rendered to the hundreds of participants of the festival.

The city of Samarqand
Samarqand, a city brimming over with history and culture, is known for being a pronounced point within the historic silk road. Samarqand could also be referred to as a city of gardens, with her avenues, boulevards, impressive architecture, universities, and academies adorned in petals and vegetation. However, what gives Samarqand her reputation is her astounding hospitality.

For eons, trade between the peoples of the West and the East has been conducted through Samarqand, where different cultures interacted and mutually enriched. This city was considered a bridge between two parts of the world, the center of the Great Silk Road. Merchants from Samarqand led caravans to China, Persia, Egypt, India, and Byzantium.

The expression was popular at that time: “Rome – in the West, Samarqand – in the East”, because these cities for the huge role in the fate of mankind became famous as ‘eternal cities.’ During the reign of the great Amir Temur, new pages were opened in the history of Samarqand. Further, in the period of the ruling of Amir Temur and the Temurids, Samarqand was not only the capital of the state but also the most beautiful city, major economic, a political and cultural center of the entire East.

Uzbekistan in brief
Uzbekistan is a landlocked country with more than 60% of the population living in densely populated rural communities. According to government sources, the GDP grew by 7.0% in the first half of 2017.

On the supply side, industry excluding construction was the main driver at 7.6%, up from 4.7% a year earlier. Within manufacturing, which is 80% of the industry sector, machinery and equipment production rose by 33.0% as external demand for passenger vehicles increased, particularly in the Russian Federation.

The direct contribution of Travel and Tourism to the GDP in 2017 is expected to rise to 7.2%. Uzbekistan’s growth has been driven primarily by state-led investments, and export of natural gas, gold, and cotton provides a significant share of foreign exchange earnings. In 2015, Russia’s Gazprom announced it would reduce its natural gas imports from Uzbekistan but Tashkent continues to export natural gas to China and Chinese investments in the country have substantially increased.

The most destructive fire of all time in Greece.