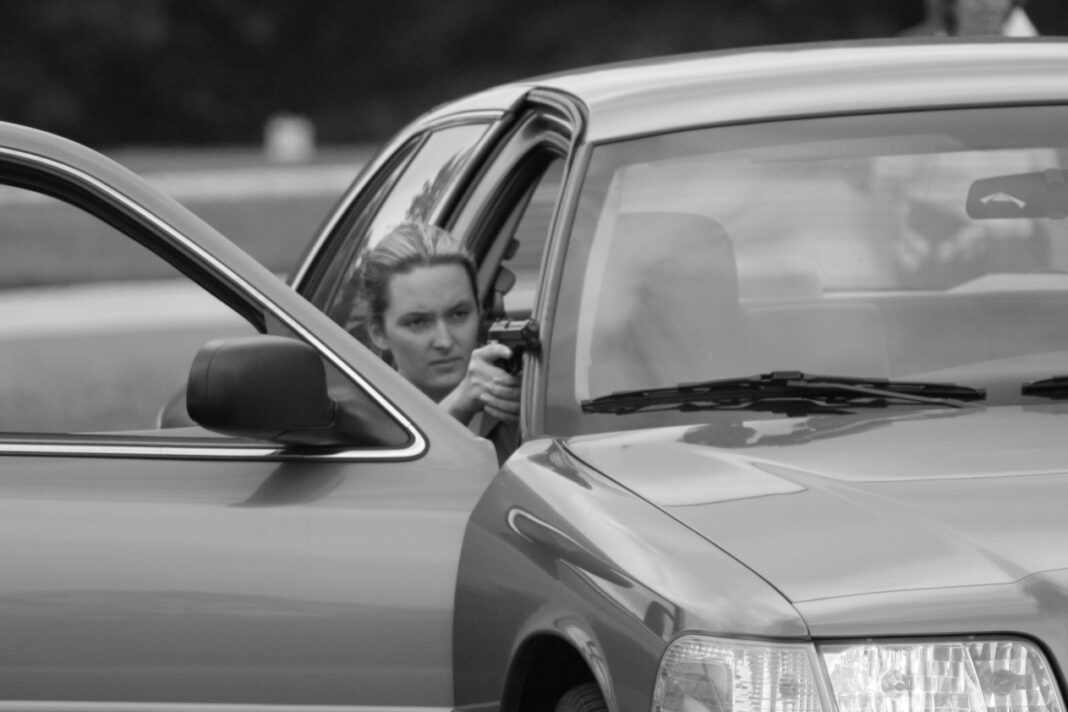 Stop, federal agent! … Who did not hear that phrase, at least once? Hollywood action movies, one of America’s best cultural diplomacy tools, are popular all over the world and fascinate us all. Men and women in dark blue uniforms, catching the ‘bad guys’ and saving the world from catastrophe, are kind of modern days heroes.

Kristine Celorio was until not too long ago one of them.

Beautiful Californian girl, with big dreams and high career goals, great at her job, she decided to follow a Master degree program in Spain and there… she lived one of those famous encounters, that changed her life 180 degrees. She met her future husband, Mexican born diplomat and what started as a long distance relationship turned later into a solid marriage. However, it took her six years to decide and make the move.

Being a federal agent and working in a team that specialized on investigating fraud and ‘white collar’ crimes was greatly rewarding and fulfilled Kristine’s early career aspirations, but eventually love won.

After all, most of us, diplomatic spouses, have been through this at one point in our life… facing this big dilemma: what should I do, is it worth it?

‘I really enjoyed my job’ she says. ‘It was exciting, different every day and I was helping people, making a difference. But one thing I loved more was travelling. So, leaving my job to marry a diplomat was like leaving a dream for another.’

She tried to find a way to transfer her previous highly trained skills into a corporate job, but it proved to be more difficult than imagined. She then decided to focus on family and her two adorable children.

Raising bilingual children is a rich and diverse experience. But she warns us: ‘Pay attention to what local traditions your kids are embracing, which may not be your own! As they grow up in a country different from yours, some things and customs become important to them, which normally wouldn’t even cross your mind. You have to constantly pay attention, get out of your normal comfort zone and immerse into a new day-to-day reality of a foreign country, where you are posted for just a limited time’.

While she is now ‘home in Mexico’, she started blogging. In her blog, ‘Irish I were Mexican’, she likes to present her beautiful adoptive country, which she says ‘is often unfairly portrayed in the media and has countless marvelous places and traditions to offer to the world’. Her blog also generously hosts other diplomatic spouses’ experiences from around the Globe, picturing beautiful places through the eyes of others and offering great travel tips, too.

‘Also, I have recently become interested in how foreign born spouses, like myself, help represent a country different from their own, often with zero guidance or training. I often argue that being a diplomat’s spouse is the only job that is not a job there is. You simply step into a role just based on your relationship alone’.

Her investigative nature and previous training determined her to run a survey and study the percentage of foreign born spouses into the diplomatic world. The results were quite surprising, showing a lot of our fellow diplomatic partners actually living this experience, sometimes quite demanding and delicate.

She says that she found the diplomatic community largely warm and welcoming and, although you often walk into a room where you don’t know anyone, you have to remember that most of the people there are probably in the same situation, having the same anxiety and fears.

‘People often equate diplomatic life to sticking to conventions, but we really constantly bend and flex to accommodate and celebrate difference’. I can imagine it wasn’t easy for her. Learning a new language, traditions and trying to be a good host on foreign territory, under foreign rules. But we all face our challenges at a certain point, once we started our way on this life long road.

Indeed, like snowflakes dancing with delicate moves into the wind, finding their way to the ground, we make our way graciously into the diplomatic world, often unknown, and try to be our best versions, reaching high expectations, to best represent our countries (of birth or not) and complete the greater diplomatic world puzzle, to which we all belong.

She speaks Romanian,  English,  French,  German and Italian. Turned diplomatic spouse by the age of 30, she published a book about diplomatic life, writes articles and also gives lectures on intercultural communication.