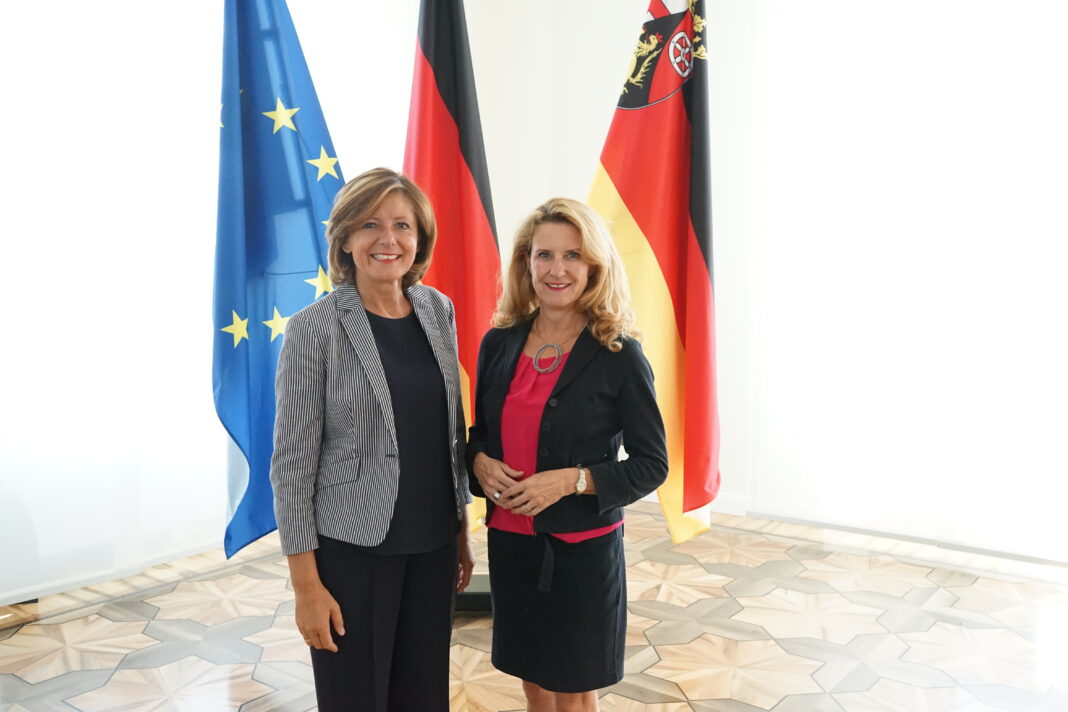 By the State Chancellery of Rhineland-Palatinate.

Germany is a federal state, whose competences are shared between the federal level and regional (state) and local governments. The Land of Rhineland-Palatinate, located at the heart of Europe with borders to France, Belgium and Luxembourg, has two representations outside of the state. One is located in Brussels and deals with EU policies and their impact on the Land.

The second representation is located in the federal capital Berlin and plays a key role in the federal legislative process. German federalism requires all 16 Länder to be represented at the federal level, in order to maintain a continuous link between the different levels of government.

After German reunification it was decided to move the Bundestag, a part of the federal ministries and other institutions from Bonn, former capital of the Federal Republic of Germany (West Germany, or Bonn Republic), to Berlin. Shortly thereafter all Länder opened new representations in Berlin. The former ministerial gardens of the Weimar Republic in the centre of Berlin became home to the new architecturally impressive buildings, including the new representation of Rhineland-Palatinate to the federal government.

Today the representation lies prominently near the Brandenburg Gate and the Reichstag building. It is neighbour to the Holocaust Memorial and has been built on the former death strip flanking the Berlin Wall, which separated the German capital for nearly three decades. The foundation stone was laid by the former Rhineland-Palatinate Premier Kurt Beck and the former long-time representative to the federal government, State Secretary Karl-Heinz Klär.

For the last six years two women have been heading the regional representation – Premier Malu Dreyer and State Secretary Heike Raab, the Plenipotentiary of the Land of Rhineland-Palatinate for Federal Affairs, for Europe, the Media and Digital Affairs.

A part from its political role the Rhineland-Palatinate’s “embassy” in Berlin, the representation can be perceived as a government institution with a wide range of tasks. It is a gateway between the Land’s capital Mainz on the river Rhine and the federal capital Berlin. It is an important meeting point for members of the Bundestag, the Bundesrat, the federal government, NGOs, citizens and other policy actors. Furthermore, it is a space for political discussions, negotiations and networking. German Länder hold the competence for broadcasting matters and Rhineland-Palatinate, as an important media site, traditionally chairs the broadcasting commission of the 16 German Länder which frequently gathers in the representation.

In addition to intensive political activity, Rhineland-Palatinate is keen to display its culture and way of life. Therefore, the representation became a well – known address in Berlin for book presentations, concerts, performances within the Berlinale festival calendar and, for example, the exhibition for caricature and political photography “Rückblende“, which is well-known throughout Germany and beyond. Many centuries ago, the Romans brought the tradition of wine making to the region that today covers our state. Rhineland-Palatinate is proud to produce two thirds of the annual German wine production. The representation is an ideal place to combine politics, art, history and culture and its broad range of events is often accompanied by high quality regional wines.

In 2020 the representation of Rhineland – Palatinate celebrates its 20th birthday, an occasion which was supposed to be celebrated with an innovative event and numerous guests, partners and companions. Due to the Covid-19 pandemic, the representation finds itself pioneering in the realisation of a very special anniversary. Yet, with positive and creative force the series “20 Years–20 Moments” with different digital and analogue event s was created mirroring the tasks of the representation and the merits of the state Rhineland- Palatinate.

Representation of Rhineland-Palatinate to the German Federation: https://landesvertretung.rlp.de/de/startseite/