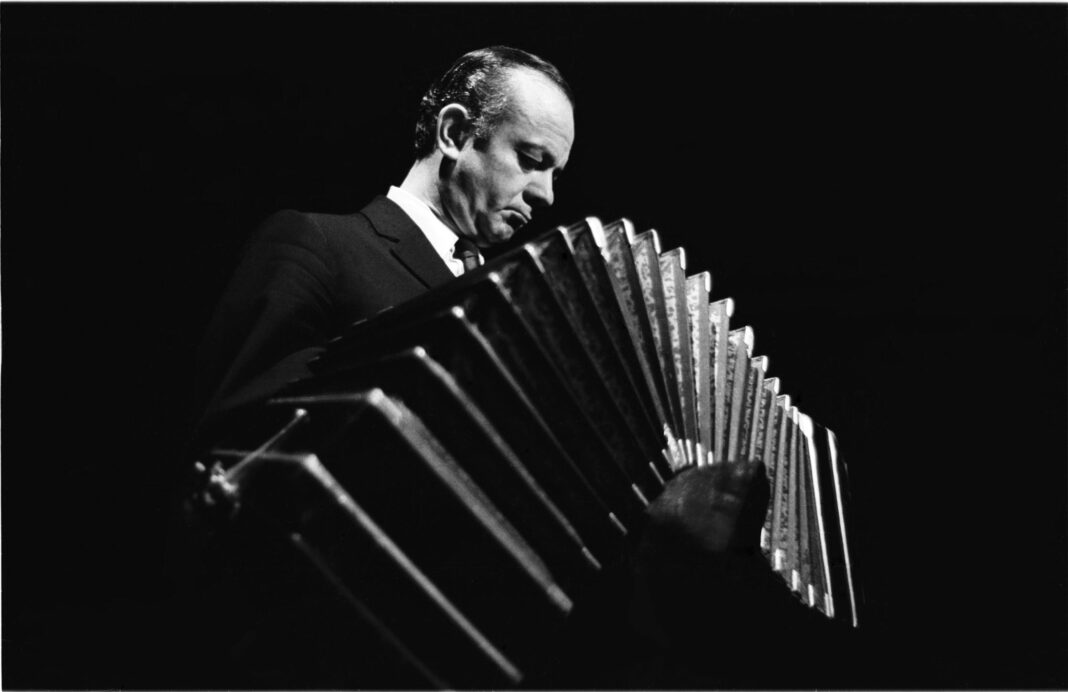 “Music is the most direct art, it enters through the ear and goes to the heart”

He was born in Mar del Plata, but grew up in New York, on the Lower East Side of Manhattan. There he learned to play the bandoneon and, in his musical quest, immersed himself in the jazz and classical music the city had to offer.

In 1936, his family returned to Mar del Plata, and it was there that Astor decided to explore tango. As a teenager he joined the orchestra of Aníbal Troilo (famous bandoneonist, composer, and tango bandleader) first as a bandoneonist and then became the orchestra’s arranger.

Between 1944 and 1946 he conducted the orchestra that accompanied the singer Francisco Fiorentino. In 1946 he composed “El desbande“, considered by himself his first tango with a different formal structure. In that year, he formed his own orchestra, which he disbanded in 1949, and began to write music for films. During this period, he moved away from the bandoneon and moved towards jazz.

In the 1950s he studied in Paris. Throughout his career he developed the “tango nuevo” style, combining traditional tango with elements of classical music and jazz. Between 1950 and 1954, he composed works clearly different from the traditional conception of tango, among them: “Tanguango“, “Prepárense“, and “Contrabajeando“. During this period he also wrote pieces of cultured music, such as “Rapsodia porteña” (1952) and “Buenos Aires, tres movimientos sinfónicos” (1953). For the latter, he won the Fabien Sevitzky prize, and the French government awarded him a scholarship to study in Paris with the famous music pedagogue Nadia Boulanger, who convinced him to persist on the path of tango. The scholarship lasted almost a year, during which time he formed a string orchestra with Paris Opera musicians Martial Solal and Lalo Schifrin. With Schirfrin, he recorded “Two Argentinians in Paris” (1955).

On his return to Argentina, he formed the Octeto Buenos Aires. When his father died in 1959, he composed perhaps one of his most beautiful works in his honour: “Adiós, Nonino“. The same song played on 2 February 2002 by the Dutch bandoneon player Carel Kraayenhof at the wedding of King Willem-Alexander and Queen Maxima.

In 1960, after Astor Piazzola’s brief stay in the United States, he deepened the fusion of jazz and tango, and created a tango quintet. In 1968, he composed, with the poet Horacio Ferrer, the little opera “María de Buenos Aires”, and in 1969, he began to write, also with Ferrer, songs for the voice of Amelita Baltar, his partner at that time. They composed “Balada para un loco“, which became a great popular hit and was followed by others.

In 1972, after a heart attack, he decided to settle in Italy for five years. He formed the Conjunto Electronico, recorded “Libertango” and experimented with his approach to jazz-rock. In 1974, he recorded Summit with saxophonist Gerry Mulligan; and, a year later, after Aníbal Troilo’s death, the album Suite Troileana.

In 1978, he returned with his Quintet and consolidated his international fame with tours of Europe, South America, the United States and Japan. In 1983, at the Teatro Colón, he offered a programme entirely composed by him.

In 1985, he was named Illustrious Citizen of Buenos Aires. In 1987, he gave a massive recital in Central Park (New York). In 1988, he recorded his last album with Quinteto La Camorra. In 1989, he formed Sexteto Nuevo Tango, with which he performed at the Teatro Ópera, toured and performed as a soloist until its dissolution at the end of that year.

On 4 August 1990, in Paris, he suffered a cerebral thrombosis that left him bedridden. He died on 4 July 1992, in Buenos Aires.

In the centenary year of Astor Piazzolla‘s birth, Diplomat Magazine pays tribute to the great maestro.

On 19 April 2021 at 15:00, the Initial Appearance of Pjetër Shala will take place in the courtroom of the Kosovo Specialist Chambers (KSC)...
Read more
Breaking News

By Roy Lie Atjam. On the 9th April 2021 in Brussels, the Republic of Uzbekistan has been awarded the status of a beneficiary country of...
Read more
Breaking News